Taking my mom to the ghetto

My first Wax Trax encounter was the gateway drug to blowing my monthly allowance on vinyl and other punk rock paraphernalia.  After I told Jimmy about my firsthand encounter inside the promise land we schemed of ways into talking my mom into driving us down there. It didn’t hurt that my mom was always up for getting out of the house but the conditions had to be ripe, like when planets align. First, it had to be on a weekend and second, my dad had to be fishing or hunting in the mountains. To appease my mom and to make it a win-win proposition for all involved, Jimmy and I always agreed to be up to doing whatever my mom wanted, even if it included a Bingo session at one of the churches. On one particular occasion we signed-up to go visit her sister Clara, who lived on the other side of town but only after an afternoon of record shopping. Mom didn’t have the best sense of direction, so she relied on me, her non-driving 13-year-old son as a human compass. I learned from early on that using the Rocky Mountains was ideal for setting bearings.

The first Saturday afternoon that we decided to test our plan turned into an urban adventure. We definitely made a wrong turn along the way and ended up in Five Points long before Denver embraced the idea of gentrifying the area. In short, you didn’t go near Five Points if you weren’t black. The neighborhood locals were kind enough to yell at us from street corners to tell us we were in the wrong part of town, a point well taken. 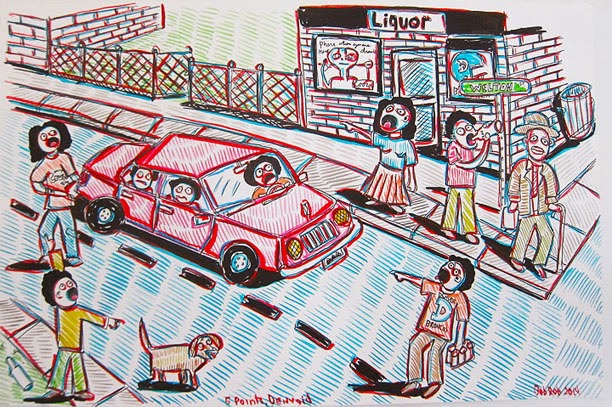 Our misdirected excursion reminded me of a Saturday afternoon a couple of years earlier when my dad drove me down to Larimer Street after a disappointing morning of fishing at Chatfield Reservoir. At the time there was a special on television called Scared Straight where convicts got together with troubled teens and told them all the gory details about what really goes on in jail. This preventive measure would hopefully curb the criminal appetite of wayward teens and keep them from going down the devil’s path. My father’s version was to have me experience bums, hobos, drunks, and drug addicts in person. In education we call it “experienced based learning.” His rational was to expose me to the dregs of society so I wouldn’t make bad choices and end up in jail or destitute on the streets. I have to admit watching two drunk Native Americans beat the hell out of each other within 50 yards of us about had me shitting my pants. He just chuckled on the back way home and with delight told my mom how scared I was. Years later he admitted that when he was stationed at Lowery Air Force Base during the 1950’s, Saturday night dates with my mom included driving down to Larimer when the bars were closing to catch drunkards battle it out in the parking lot.

From 5 Points, we eventually made it to Uncle Lon and Aunt Clara’s house. We all sat in their basement family room and my mom told them about our harrowing adventure. You could almost hear my uncle’s thoughts about us driving through “the ghetto.” At the time he had a belief that any black person on the street up to no good after he and my dad were robbed at gunpoint in San Diego in the late 70’s. When the African-American police officer investigating the hold-up asked my uncle what the robbers looked like, he politely responded “like you.”

He continued sitting in his Lazy Boy chair watching Saturday afternoon sports on TV muttering a couple of his off-comments about whatever came to his mind. He was funny and quick-witted, sort of like a Mexican Archie Bunker, always with a story and an opinion. He had a magnetic personality that people were drawn to; unapologetically the center of the party. I was usually the first one in the car at the mention of going to visit him and my aunt.

Jimmy and I snuck off to the corner near their stereo and opened our bag or records. We asked Uncle Lon if we could play them. He agreed in passing while watching Lee Trevino slice one into the woods. His fixation on the golf match was rudely interrupted a few seconds after releasing the needle into the record’s groove. He immediately reneged his offer. “Robby! What they hell is that noise?” We tried to give him a quick crash course on punk and even went on to explain the ethos, the humanitarian values punk rockers posses, such as wanting to help people in places like Africa. He just shook his head and killed our naïve utopian, kum ba yah dreams of saving the world with a response to the effect of “I have a solution, we should just cut off their pee-pees so they stop having kids.” Jimmy and I sat in his presence defeated. That was his generation’s brand of tongue and cheek humor; we nervously laughed while slipping our vinyl back into the sleeves. 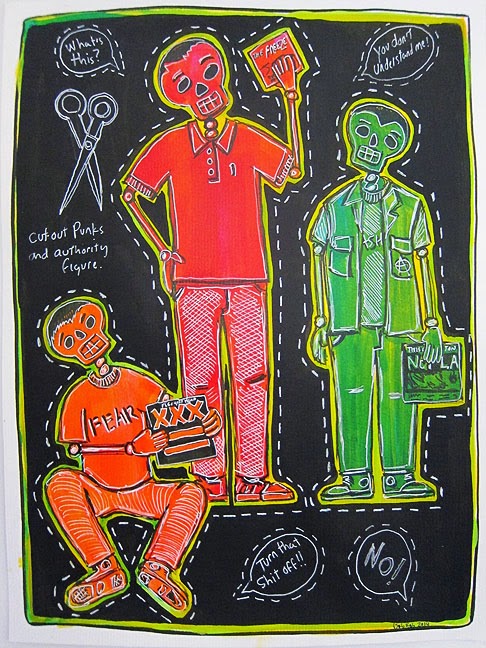 Jimmy and I always thought that Punk served a higher purpose beyond embracing individuality, but to make the world a better and safer place. We knew my uncle was “live and let life” kind of guy, and like my dad he never taught us to hate or discriminate against anyone despite growing-up with some of prejudice leanings. My dad grew up near Japanese internment and German prisoner of war camps in southern Colorado compounded by the fact his brother fought in the Pacific during World War II, so by default he and his town had certain ideas about Japanese and German people. It’s easy to give into fear when people are culturally different than you are, especially when the media dehumanizes them. When Jimmy and I listened to bands that sang about these type of injustices, we were on board. What’s the point of hating someone different than you, we were different and didn’t appreciate the hate that came our way for looking the way we did.

Our DJ session at Uncle Lon and Aunt Clara’s house was a bust, as was our ill-fated attempt at converting my uncle to the ethos of punk rock. At least our drive back home was uncontested.

Special thanks to Ana Medina and Monica Zarazua for editing
Posted by Bob Rob Medina at 2:10 AM