It has been awhile since my last post in June. The idea was to spend the summer doing research, talking with friends, and collecting Denver punk artifacts. The fall would be devoted to wrapping-up the writing and art and have it delivered to the editor and designer by late December. This is still my goal.

As my wife Ana and I were preparing to return back to work in Ethiopia in late July, my father had a stroke and passed less than a week later. I’ve been struggling with the loss, which has affected my writing and art making. Typing out the first draft of the story below was like pulling teeth; I’ve been sitting on it for weeks. I woke up the other morning after a series of bad dreams and for some unknown reason the song “Parents” by the Descendents was on loop in my head. The song, the dreams, it all clicked. I scrapped the original draft and banged out a revision. The inks and the paints are out on the table; it’s time to get busy.

Parents, Why don’t they shut up? Parents, they’re so fucked up… The iconic song by the seminal SoCal punk band the Descendents was the soundtrack for many of my friends growing up in the early 80’s. The lyrics perfectly captured the growing pains and strained relationships between parent and child. I’m pretty certain that every person has battled and tested the will of their parents growing up. Some carried that struggle well into adulthood and perhaps straight to the grave. There is something innate about seeking approval from our parents; in short, we want them to love and praise us in everything we do. As to quote Bill Cosby, "I Started Out as a Child" and would like to include that I’ve been teaching in the classroom for almost 20 years, I feel confident in stating that all children just want to be loved.

The tender love between parent and child isn’t always a guarantee. The hardships of life are constant barriers that some adults have trouble putting aside. It takes a lot of love to unconditionally give to another person day in and day out in the lifelong contract of parenthood, though there is notion in America that the cord is cut on the eighteenth birthday. Healthy relationships seldom come naturally, it takes work to maintain them. It’s easy for an angst-ridden teen to point the finger at mom and dad. Some punk bands had their own way of verbalizing their discontent with parents. San Francisco’s Sick Pleasure had the tongue and cheek song, “I Want To Burn My Parents.” Orange County’s D.I. jokingly shouted No Moms, “What we need is no moms!  They don't understand me.” Denver’s hometown heroes, The Frantix unapologetically sang “My Dad's a Fuckin' Alcoholic” When asked whose father in the band was an alcoholic, the band nonchalantly responded, “isn’t everyone’s father an alcoholic?”

Ironically the bands that sang about parents back in early 80’s I know for a fact are parents themselves thirty plus years later. Currently the Descendents are playing a couple of Riot Fest shows with original bassist Tony Lombardo. The group is performing the entire Milo Goes To College album, which features the cut Parents and other coming of age songs like Suburban Home “I don't want no hippie pad, I want a house just like mom and dad.” That notion has pretty much has come full-circle, be it that the band had envision it or not. The band members have spouses, kids, pets, houses, and the whole enchilada. I wonder what the band’s take would be if their kids formed a band and wrote songs about their parenting skills? Perhaps they would encourage it. 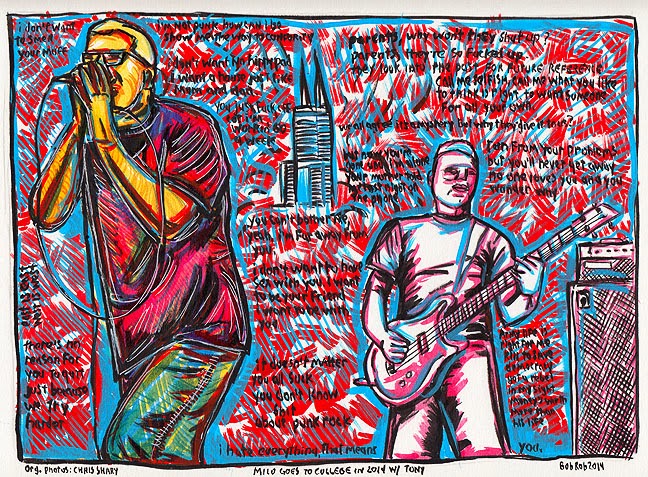 I had been in my fair share of bands since 1983. In 1987, my friend Toledo Pat and his girlfriend rode back to Denver with me from the east coast. They initially stayed at my parent’s house for a week. During that summer we tried to get a band going. We wanted to do something humorous, dumbed-down, and elementary to mock the current state of punk rock. Pat had mentioned that he had a joke band back in Ohio called the Lawn Honkies that played all MDC (Millions of Dead Cops) covers. The highlight of the group was actually opening for MDC. I thought that was brilliant way ridicule and take the air out of a heavily charged political band. We formed Mohican Youth (in reference influx of bands that incorporated Youth into their name). We had six songs that were more or less the same cord progression played at different octaves. Our song titles were: school sucks, works sucks, parents suck, and anything else that would be stereotypical or what we called Quincy punk (mainstream media’s demonization of punk) . We used the same lyrics, but just interchanged the noun.

Pat and I scribbled down the lyrics on backs of fliers and left them lying on the floor of my bedroom. At the age of eighteen after graduating high school I was still occupying my childhood room coupled with all the perks such as mom doing my laundry. One afternoon I’m guessing sometime between classes at the community college and working at the donut shop was when my mom dropped off my clean underwear, shirts, and socks and discovered the flier with the words to parents suck. Unknown to her that Mohican Youth was purely a joke band, she took a pen and scribbled something to the effect of “we fucking love you son!” and left it on my pillow. Later that day when I discovered her note, I was beyond embarrassed, I felt horrible that I hurt the person who loved me the most. My mom immediately broke into tears when I found her to explain the joke band and lyrics. While she didn’t have the frame of reference to entirely understand the sarcasm and the mockery, but understood enough that it wasn’t a personal attack on her or my dad. It was a hard lesson in communication learned that day.

I wasn’t exactly the ideal child growing-up. I did my fair share of testing my parents. My dad in particular didn’t like that I got into punk rock, especially the aesthetics of it. He had clear rules and expectation and was always forthcoming in making sure I was aware of them. Mohawks, dyed hair, and torn clothing were out of the question. He especially hated the foul language bands used in their lyrics. Above all, he wanted to make sure punk wasn’t the gateway to drugs and crime. Other than that, he never denied or stood in the way of my interests unlike some of my friend’s parents who thought punk rock was the arrival of the antichrist.
I would go as far to say that my parents encouraged my preoccupation with punk; they did take me to record stores and funded my record buying habit though chores like mowing the lawn and shoveling snow off the driveway and sidewalk. My dad drove me to shows, and when I wasn’t out of the venue by midnight, he’d come in and fetch me. There were a couple of occasions when he had to walk through the pit of slam-dancers to find me. My parents put up with the racket of my friends and I made in the garage learning to play our instruments. There was even a bass guitar under the Christmas tree one year. All the above was more or less a testament that they were ok with it all.

Like any other self-absorbed teenager, at the time, I focused on everything they wouldn’t let me do. I get it, most parents just want to protect and keep their investment alive. It’s the duty of a parent. Kids often forget their parents have a lot of shit on their plates as well. After a long day of work, it’s hard to muster up the energy or desire to drive a kid across town for a punk rock show. I understand and appreciate that now as an adult. Sometimes you need perspective, distance, and experience to truly understand. In retrospect both mom and dad were pretty great and I was very fortunate to have them. Even the Descendents had to grow up and now sing about juggling relationships, kids, and work: “Who knew the way things work in this world we’ve made for ourselves? Where I work myself to death, and you raise the kids…”

Special thanks to Ana Medina and Monica Zarazua for editing help and Chris Shary for being there and photos.
Posted by Bob Rob Medina at 3:57 AM