Marilyn Megenity of the Mercury Cafe

Sonny is spending all his free time tweaking the pages and making it look fab. I'm impressed with his progress. Do yourself a favor and preorder the book and get extra goodies in the mail. Last day for me to send out the freebies in THURSDAY before I head off to Egypt. All orders will be promptly sent when I return in October for the book release. You can do this by visiting: http://bobrobart.bigcartel.com

For Marilyn Megenity, the proprietor of the Mercury Cafe, cultivating Denver’s hub for live underground music in the early 1980s was an uphill struggle. She battled landlords and walked a fine line with city regulators to create a space for an organic restaurant as well as local and touring bands to play original music. As a lover of music with a reputation for taking care of bands, her honest and grassroots approach has been the foundation of her success. Although her venue underwent a couple of incarnations until 1990, she finally secured a permanent location that remains in operation today.

Marilyn circumvented city regulations and accommodated audiences of all ages under the guise that first and foremost the venue was a restaurant. Additionally, she hosted matinee shows, including Black Flag and Dead Kennedys, to make sure budding hardcore youth were able to see their favorite bands.

Since Wax Trax existed around the corner from the original Mercury on Pearl Street, the two entities formed an alliance and consolidated punk rock in Denver’s Capitol Hill neighborhood. From 1979-84, monthly calendar dates of the club were jammed packed with events, live and otherwise, to suit those who broke from the mundane nightlife Denver had to offer. Certainly on any given night of the week, patrons were going to experience invigorating and cutting edge culture.

At her new location, she continued with the same ethos: serving local organic fare and providing live music of all genres. I formed a working relationship with Marilyn when I booked touring and local bands at her club from 1990-92. She not only provided a space, PA, doorman, but also counseled me on how to be a fair and honest promoter, for which I will always be thankful.

Forty years later, she is still running her operation on her own terms, and she offers no signs of slowing down.

How did you create a space that would both be a restaurant and a venue for live music?

Landlords kicked me out of Denver a lot. The first time we were at the space on 1308 Pearl. I had hilarious gangster landlords and just before they kicked me out I had been booking local bands, this was 1979. One of doorman suggested doing national acts. Shortly after that, the landlord kicked me out. (Laughter).

What sort of gangsters? Mafioso in pin stripe suits? But more importantly, why did they kick you out?

The landlords were dealing drugs and making shady business deals. They kept raising the rent on me every week. One time I asked them if they wouldn’t, so I could fix a leak in the roof. The leak was near the electrical equipment, so they kicked me out.

The building sold, and there was a new landlord, so I moved back in 1981. Wax Trax was across the street by then. I knew I wanted to book touring bands, so I put that out there. There were a bunch of local new wave bands I started booking. Barry Fey was really the only other promoter in town at the time for rock and roll, and he wasn't hip to punk. A lot of bands started calling me themselves. If I didn't know who they were, I would call Wax Trax and say, "Hey, do you think I should book this band?" and they'd say, "Yeah, book them!" The bands would sometimes do an in-store thing at the record shop. That’s how we got started. 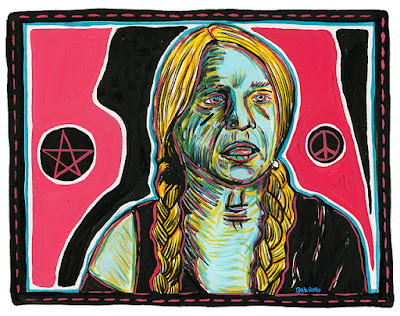 To see more order the darn book!
Posted by Bob Rob Medina at 12:27 AM