Bicentennial year: red, white, and blue covered the landscape, America would be electing a new president, souped up Chevy Novas tore down neighborhood streets, John Ralston would be leaving the Denver Broncos at the end of the season; all this was the sign of good things to come. It would also be the year my parents continued chasing the American Dream by leaving our postwar late-1950’s home in the old part of Westminster for a newer neighborhood east of Denver, Aurora. At that time, in the minds of most Denverites, Aurora was on the outskirts of Kansas. My new neighborhood and school were both predominately white and middle-class. Being one of the only Mexican-Americans, I stood out. I befriended the few black kids at school, because we were all on the same steep curve to assimilation. Being different wasn’t easy. Joining a little league team and Cub Scouts as a possible portal for blending in lasted a couple of months; Saturday morning games and chasing badges wasn’t my thing. By the time I was ten, anything that had to do with building models and playing army held my attention. I was well aware of my differences and felt like I would always be an outsider.
In the late fall of 1980, during sixth grade, a new student from San Diego, another Mexican-American, joined my class. His name was Jimmy Lopez and he would later be responsible for turning me on to punk rock. We immediately became best friends because we shared a similar pocho identity, but he was more Mexican than I would ever be because, well, shit, he ate hot chili. The secret ingredient to our initial bonding was the black Velcro “Lowrider” wallet I bought at the flea market and carried in my back pocket. He was the only other person at school who knew what the vato with the mustache and sunglasses was. Órale.

My cultural identity was butchered, part of it came from weekend visits to my relatives who stayed planted in the barrio; Denver’s westside: Inca Boys, Lincoln Street projects, liquor stores, carne asadas at the park, turn of the century houses-it was radically different from my tidy community in the suburb. My parents embraced the idea of assimilation, my dad was a former military man turned office supervisor who grew-up in a southern Colorado mining town. He worked on the railroads as a teen, he was smart enough to figure out his future if he stayed. He enlisted in the US Army Air Corps after high school and faithfully served his country for 24 years; that was the ticket to the American Dream for his generation. For many postwar Mexican-American families there were two choices: one that maintained and embraced their cultural heritage while the other sought the melting-pot illusion. My fate of being bi-cultural was inevitable.

Jimmy and I hung out all the time and spent the weekends at our respective homes. If we weren’t creating ruckus, we’d be on the phone for hours; we were brothers from another mother. During sleepovers my room turned into something like East LA, we dressed-up like cholos, sporting headbands and flannel shirts and those K-mart homie-style shoes. We acted like we were some badass vatos within those four walls. On occasion, late at night we would sneak out of the house and walk around our idyllic neighborhoods only to avoid detection by the police. It was a silly cat and mouse game we played in our minds; spotting headlights, thinking it was cop car was such a rush. In reality, we were both too chickenshit to do anything beyond violating curfew. Walking around a block or two predictably became boring and that prompted us to return back home and raid the fridge before parking ourselves in front of the TV in those pre-cable television days of late night test patterns. 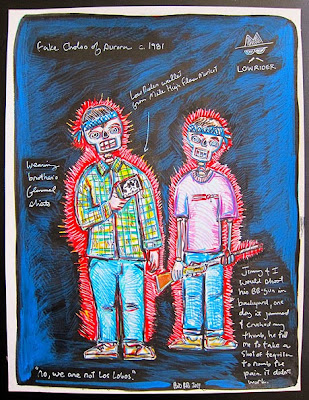 Jimmy, was certain there were others like us stuck in the suburbs and on several occasions thought it would be a good idea to wear bandanas and hang out at the Aurora Mall and Buckingham Square hoping to run into other “cholos” or at the very least pick-up chicks. Neither was a success, we usually settled on combing the isles at Spencer’s Gifts looking at glow-in-the-dark velvet posters, lava lamps and adult party games. If we were lucky and had a couple of bucks, we’d go see a movie.
The summer between elementary and middle school, Jimmy was sent to California to stay with his tia in Santa Maria. From my end it was a lonely summer. He returned in August right before the start of seventh grade. He looked different; his hair was shorter and he was transitioning out of his quasi surfer-Ocean Pacific (OP)/cholo look. He carried back a small stack of cassette tapes his cousin had given him. He asked me if I ever heard of punk rock. I gave him a blank stare; I honestly had no idea what he was talking about. I only listen to music what my parents had in the 8-track player such as: Freddie Fender, José Alfredo Jiménez and the True Grit soundtrack to name a few. My mom had the radio tuned to 56-KLZ “Colorado Country” or whatever station had a contest. The only real records I truly owned and bought with my allowance were the Star Wars and Close Encounters of the Third Kind soundtracks.
Jimmy popped in one of the tapes and hit the play button. It was like portal to a new world opened. Chaos and speed poured out of the speakers, it was my self-portrait, I was an instant convert, no questioned asked. I’m not going to lie and say I listened to acid rock or heavy metal then moved on to punk like many of my peers did. I truly didn’t have a reference to rock music.

The sounds coming from the tapes made sense; it captured and expressed what I had been feeling internally. The songs were packed full of rage and energy that jolted my spirit. We played those Clash, Sex Pistols and Black Flag songs to death. It was clear our pseudo cholo phase had run its course; Jimmy declared, “cholos don’t listen to punk.”  We started going to the mall to find record stores that sold punk records. The best we could do was find the first Clash album, Sex Pistol’s Never Mind the Bollocks, and B-52’s Wild Planet. Our lunch money and allowance took on a new purpose and that was to fill our bellies with as much music as possible. All the clerks at the stores in the mall told us if we wanted to find more punk rock, we’d have to go downtown to Wax Trax. That would be our holy grail.

Our newfound punk attitude didn’t win us many new friends at the start of seventh grade. In all fairness, we embraced our differences and didn’t care about fitting in or seeking approval from the preppies and jocks that ruled our school’s culture. Our school population was comprised of mainly middle and upper middle class who subscribed to the Reagan jellybean-eating mentality of the day. It was easy to see many of them aspire to the conservative teenager Alex P. Keaton from Family Ties. The concept of punk rock was uncool and disturbing to most of my Izod and topsider wearing peers to the point that it was confrontational. Being a punk was an invitation to be verbally and physically harassed; it also summoned a lot of unwanted attention from my teachers and the school’s administration. I was tagged as a potential “problem student.” Their preconceptions of me eventually became a self-fulfilling prophecy the following year.

My parents really didn’t understand what punk rock was and for the most part were pretty hands-off with my involvement in it. They were practical, unlike several of my friends’ parents who sent their kids off to shrinks to be evaluated or deprogrammed like they joined some crazy far-out devil-worshipping cult. In all seriousness, there were organizations and programs set-up on what to do if your kid turns punk. For me, embracing the punk attitude was a natural transition, I already knew I didn’t fit it, and now I hung out with others who felt the same way.

Reagan’s crones had really sold America on the illusion of a perfect Wonder bread-eating nuclear family dream and any deviation from it was unacceptable and was not going to be tolerated. Like George W. Bush professed several years later: “you’re either with us or against us.” It’s statements like the above that leave no room for diversity or differences of opinion.

Special thanks to Ana Medina and Monica Zarazua for editing
Posted by Bob Rob Medina at 9:51 PM