Denvoid and the Cowtown Punks Volume 2: The Colorado Crew is coming out this year. Really it is. Sonny Kay and I have been slowly chipping away at it over the past 3-4 years. The problem is that this is a hobby and often takes a backseat to our jobs and families. On my end, living in Alexandria, Egypt makes calling folks across the pond tricky. Additionally, I'm in the process of relocating to Abu Dhabi for work; there are plenty of balls in motion.

I'm obsessed with this project and feel lucky when I'm able to set aside chunks of time towards completing it even if it entails transcribing interviews in the front seat of a car on the way to Cairo. My bigger problem is that I want to include everyone and don't know when to stop. Typically, I interview one person and usually go, "Ohh, I should also interview this other person" and it avalanches from there. So here we are. forty plus interviews later and we're STILL hunting down the last couple of folks. As the project has expanded beyond the initial vision, it will easily overshadow the first Denvoid book in its massiveness (and star power) not to mention tons of artwork, photographs, flyers, etc. Unfortunately, not every band from that period (1988-1996) will be interviewed, but we are being conscious to include them in one form or another.

Q: When will Denvoid 2 be reseased?
A: Mid-December 2019. Not the ideal time, but it's the time I can get away from Abu Dhabi. We are contacting people to try and make this a special release. Ideally, we like to devote a weekend to this event with bands playing at different venues around Denver. My goal will be to release excerpts of interviews each week until the book release.

This first installment features Keith Curts. I've had the pleasure to play music with Keith from 1994-96 with both Junkdrawer and Llamas NoVa. When I met Keith in 1992 he was just starting out, I had seen his first band, So Far Gone play. The band was young, but everyone involved had an intense energy to them...although their set was technically sloppy, it was played with passion and sincerity and that's what mattered. They were heavily influenced by the DC sound that had pretty much infected every corner of the country - even in Longmont where So Far Gone was hatched from.

Keith's next band, Junkdrawer made room for me after I returned from living a year in Birmingham, Alabama. We played out often and even survived a three-week summer tour of the southwest and west coast. After Junkdrawer called it quits: Keith, along with Patricia Kavanaugh (Harriet The Spy), Sean Watson (Savalas drummer #3), Mark Bradin (Savalas drummer #2) and I  didn't waste any time in forming Llama NoVa. It should be noted that Tim Nakari (Small Dog Frenzy) played in the second incarnation of Llamas NoVa.

In 1996 Keith left Colorado for the bay area and played in a few band there including Subpoena The Past with Sonny. Upon his return a decade later he played in: Glass Hits, Fauxgazi (A Fugazi cover band that went on tour - check out the documentary here and of course his latest project Echo Beds.

Keith caught the playing music bug early and never stopped. He had always pushed himself to learn and grow in his endeavors. Always humble, approachable, and easy to strike-up a conversation with. Enjoy the excerpts of the interview.

What did that whole Longmont scene look like to you?

There was our band and New Breed who was Andy Lefton on Bass, Jared Allen on guitar, Matt Sandau sang, and Mike McNaughton on drums. Mike eventually ended up in Linus. There was also a crossover metal band kinda like DRI, called Salacious Crumb. This guy Nick played with them and Jason Barlowe. Jason ended up playing bass in Linus. So there was this thread throughout the Longmont scene. There was another band with Mark Risius and Andy Brazycki and a couple of other people, they would go through different names changes, Fahrenheit 451 was one of their names at one point. There was also Caste who was Will Welty, Dan Parris, Pete Lyman along with Mike McNaughton. Mike and I went to high school together and he was the first one who turned me on to things like Godflesh and Nitzer Ebb. You know, I remember in 9th grade I was getting turned on to so many different things and it kind of kept going. Then you have this moment trying to figure out your music identity; Am I a new waver? Am I a punk rocker? You don't realize it's all under the same umbrella. Then you start putting it all together, like Godflesh is kind of a punk band, kind of an industrial band, kind of a metal band...

The few of us would take a bus into Boulder to catch a Savalas shows. We'd see people from Dead Silence walking around and that was weird because we were from this little podunk town and Boulder seemed like it was so much more grown-up because it had more of a scene. We looked-up to that. Seeing some of those bands were life changing, to get to experience Savalas, Belljar, Dig, Small Dog Frenzy… That was out big city experience. (laughs)

What was So Far Gone's first show? When did you guys actually start playing?

We would play in Jeb's dad's garage or like my parent’s basement when they went out of town and my step brother wasn't home. We’d play in other people's living rooms. I remember playing a show at a grange hall in Lafayette. The Offspring and G’rups played there at one point. We had local shows there too. We weren't a good band. At least I felt like I wasn't a good part of that band. (laughs). It was the thought that counted.

I remember Brian Gathy and I liking So Far Gone at the ballet studio show in Boulder.

Oh yeah! We did play that show because it was recorded! We played with Belljar and Dig. It was Dig's last show because their guitarist, Ken Smallwood was moving back to the East Coast. I vividly remember Brian Gathy smashing his bass into pieces, like splinters because he was so distraught that the band was ending. Later, I got to know Brian and understood that was how he was... I had never experienced anything like that before. I had never witnessed that kind of emotion that connected with music. I didn't get to see bands like Rites of Spring. I know Brian did since he was from DC. Watching Brian that night, I just connected with that. And Belljar’s set - Grant Gutherie just fucking wailing. That was an amazing time.

Like with So Far Gone, we didn't know what we were doing. We didn't do it long enough to actually get good at it. It wasn't like you listen to a bunch of records and then try to figure out how to play like that. We just played. There was no artifice and no roadmap. Dan turned me on to a lot of the Dischord stuff, “emo stuff” that just rang a bell with me. I immediately became inspired by all that stuff, but I couldn't play like that. We just all started playing. Andy Rothbard and Jeb had been friends forever, there were like fifteen when we started the band, I was 17, and Dan was 19. It really was a collaboration, a sum of its parts where everyone came in with something different. It was like creation for creation sake. That was it, it was really liberating to just play. The beauty of youth, not yet looking through the microscope.

Reflecting back on the on that show at the ballet studio, it's funny how some people had that “holy shit” moment seeing Brian smash his bass. I saw the appeal of witnessing someone shattering an instrument because they were consumed by the moment. I can tell you for certain that Sonny and I had a different “holy shit” moment as in, "Fuck, Savalas is about to head out on a three-week tour AND fucking Brian just smashed his bass. You know, we were like, “What an asshole.” (laughs)

Savalas was really good, you guys were older and knew how to play your instruments. You played shows, toured, had shirts with Chris Shary's artwork! If Chris Shary is doing you artwork that really meant something...Take this as a compliment, because it is, I never met anyone with tattoos before (laughs). Seriously, we looked up to you guys. We were like, "These guys know what's up." We're just fumbling around in the dark over here and that's fine because I'm seventeen and I'm allowed to do that. So I get it that you and Sonny were being practical while we were looking at Brian in awe.

So we have to talk a little bit about that too. At least just touch on it. There was a weird backlash between what was punk and what wasn't. That was a strain for our band, it wasn't like we were careering or on the fast track. It was around that time that some punk bands were getting picked up by bigger labels like Shudder To Think, Samiam...

And that Shudder To Think show was being boycotted by some of our friends because it wasn't punk enough!? It wasn't a punk show?  Huh, that really like confused me. I thought what we were doing was a punk band. The fact that we did it ourselves and didn't rely on anyone else. We wrote everything ourselves. You booked everything pretty much. It was all us, but that somehow wasn't punk enough. It kind of was a kick in the nuts, you know.

It was disheartening and reflecting back on it, it was petty. The whole DIY thing got really out of control, it was like the absurdity in the DIY culture that the TV show, Portlandia lampoons. When did punk start having rules, that's kind of an oxymoron. Who gives a shit if we played a $7 show?

It became a very dogmatic thing. 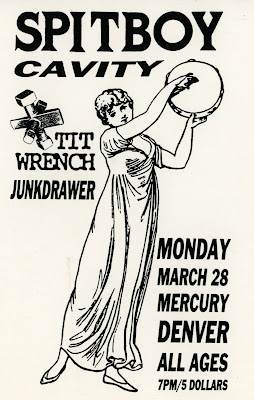 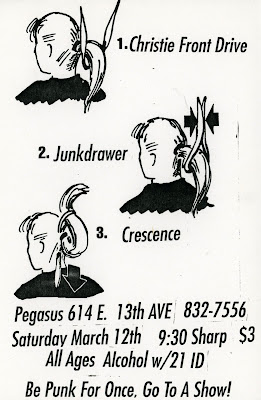