You can still order the first Denvoid and the Cowtown Punks book from Amazon by clicking HERE.

From the forthcoming: Denvoid 2: The Colorado Crew due out in Dec. 2019, a short excerpt from our interview with the Warlock Pinchers.

My introduction to the Warlock Pinchers came by way of the US Post Office. The band must’ve found my address on the first Donut Crew compilation and mailed me a copy of their self-released, This Is The Cobbler And He Hates Your Bellbottoms EP. Once I got past the title and opened the record that’s when I realized that these guys were waging war on the predictability of punk rock and perhaps music in general. An odd assortment of unrelated items spilled out from the off-registered two-color photocopied sleeve. The mess that laid before me was an absolute labor of love and it had my attention.

I was curious about the music packed inside those grooves and couldn’t wait to set it on my turntable. The song title that initially caught my attention was, James Dean Is An Overrated Asshole. That needed immediate listening. As the record spun I stared at it completely dumbfounded. I looked at the cover then looked at the record then glancing at the pile of coupons, stickers and whatever else the band shoved in the sleeve. After the first side ended. There was still hope for side 2. Nope. It looked punk, but it sounded like bad rap over distorted noise…an instrument for New World Order torture. Aesthetically, it was the best thing to come out of Denver since the Bum Kon or the Frantix EPs. Maybe even better than Tom Headbanger’s handwritten zines and flyers... 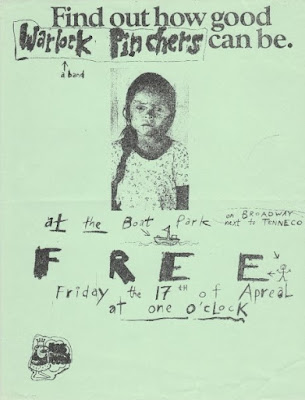 Eventually the band became five permanent members. How did the others join?

Andrew: I came in as a percussionist. I would go to the practices and play along with the drum machine. I was into industrial music, stuff like Psychic TV...I can beat on metal. I started doing backing vocals because the band came from seven people where everyone would yell the key words. I would start yelling the key words. Dan was writing, listing to all this rap and he was writing stuff where he could switch-off vocals to a tee. He could write something that was way more complex and play with having two vocalists where you could talk over each other, line to line and overlap. Dan was writing really cool stuff to experiment with vocals.

Derek:  This is kind of out of order, but my first show with WPO was at Penny Lane, and I think we were opening for Again!, Dave Clifford’s band.  Bob, I think you were putting on the show, and wouldn’t let me in without a ticket.  I kept pleading that I was “in the band,” and you finally rolled your eyes, and said, “yeah, sure” and let me in.  That’s the show where we had a squirt bottle filled with acetone for pyrotechnics, and the outside of it caught on fire, and then someone stomped on it, and we basically caught Mark’s drums on fire.  I thought Penny Lane was going to burn down and that I’d be fired.  No more rock n roll fantasy for me.

Dan: Our crew was Smedley's Van and the Warlock Pinchers. We'd try to play shows together whenever we could. They had a goofy sense of humor like we did, but they were doing something different musically.

Derek: I think the thing we all had in common was a combination of openness to - and interest in - everything, but at the same time an initial and total lack of respect for everything.  Things sucked unless proven otherwise.  Smedley’s Van wanted to make a whole album that sounded like Led Zeppelin just to show how unnecessary Led Zeppelin was.  It turns out we didn’t have the skills, and somehow ended up writing “Psycho Santa” which is even more sad because we were trying to recreate “Ghetto Defendant” with the Allen Ginsberg voice-over stuff (which we loved!).  So yeah, a long way of saying we had the same ethos.

Eric: I was a few years ahead of them at CU. A friend told me that this band the Warlock Pinchers were playing a party at my old house and that I should go check them out. It was amazing. Around the same time, I was helping Michelle Clifford out at the Program Council at CU booking bands at Quigley's. I was up at in the office of Program Council when Mark came around when the 7" was finished. Mark gave me a copy. I was always into the punk rock do it yourself thing. I was booking a show for Steel Pole Bathtub at Quigley's. At the show I told Mark it would cool to have a band with two bass players. Mark was like, "Well maybe, yeah."

Dan: I wasn't around for that conversation, but I definitely heard about it after the fact. Mark said, "We have a show at Quigley's” and the day of the show I got diagnosed with mono so I couldn't do the show. I couldn't sing. I think that's the day Eric was talking to Mark about that, because after that Mark goes, "I was talking to this guy Eric and he wants there to be two bass players in the band" I went, "Ok"

Eric: After that we practiced in the basement Dan's parents’ house in Louisville. I drove up, joined in at practice and that was it.

Derek:  Yes, we did overlap for one show!  Salt Lake at whatever that awesome place was.  We were naked except for Brian and his dog food wrap… I think that’s the trip where I remembered that I forgot my guitar when we were north of Fort Collins.  I’m still sorry about that… 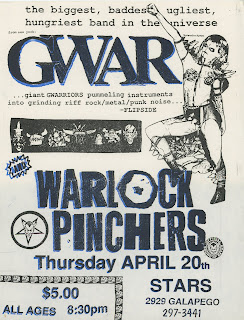 I think a lot of people underestimate the influence of the book, Pranks at the time. It was literally a how-to guide for culture jamming.

Andrew: It sort of gives you permission to lie and do whatever. Also, trying to get shows on tour, you had to have a manager. But, of course we can't afford a manager. No club wants to talk to the guy in the band. So we had a fake manager. His name was Wil Wheaton. It was ridiculous because no one ever realized that Wil Wheaton was a child actor.

Dan: That came about by playing with the Butthole Surfers. They had the teen magazine in their dressing room. They were looking through them and there's all these pages with Wil Wheaton and their drummer Teresa said Mark looked like Wil.

Andrew: Since we didn't get sued by Tiffany, we weren't going to stop there, let's just say we got sued by Tiffany. So we made a press release and Wil Wheaton sent it out to all Denver’s media. We made a fake logo from Tiffany’s manager and put it on letterheads and everybody called. The Denver Post, Rocky Mountain News, Campus Press Westword, Colorado Daily...They all called, wanting to interview us. I had this wall of Tiffany posters and flyers and magazine clippings and I had Tiffany shoe, which I totally made up. It wasn't her shoe. Yes, I did meet her, yes, I did interview her. So we fuck-up the interview and it sounds totally fake and I say I got her shoes which I got on clearance somewhere and I have this Tiffany stamp from a Columbia House mailer which I licked and put on the shoe. So I said Tiffany gave me her shoes when I interviewed her because she didn't want them anymore. It's all true, I'm a Tiffany fan but then I lied about the shoes for no reason. Lied about things that don't matter. The press is interviewing us and Wil Wheaton is not around...

Derek: Before Eric interrupts, I’ll just point out at that this point I’m still not in the band, but I’m living with Mark and Andrew and “Wil”.  You can’t imagine how much fun it was to answer the phone, trying to figure out as fast you could who was trying to call for whom and what to say/do in those split seconds.  Some kind of crazy chess game where we got to make up the rules as went along.  I’m still not quite sure how pulling a prank differs from just being an asshole, but it was a blast.

Eric: This is a good place to interrupt! I had an awkward encounter with Gil Asakawa form Westword because I was working at Wax Trax then. He came in asking about the Warlock Pinchers because they just got the press release and he was all hot to write this story about sticking up for the little guy. He was asking me and I was trying not to let him know I was in the band. It was actually Mike Serviolo who told him to talk to me. He asked me about Wil. So I had to face-to-face lie to him about Wil Wheaton. I told him "I don't know where he is." I guess I lied well enough because Gil's Westword story was one of the few to go to press before the lid came off our scam. 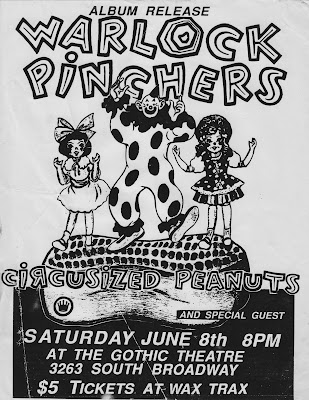 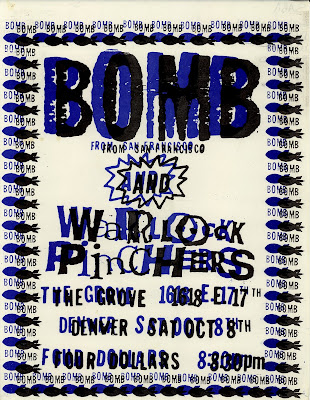