Albert gives himself a mohawk before taking a piss.

The Bathroom Barber Shop
Almost ten years ago I met up with an old middle school friend, Al, at Chili’s across from the old Aurora Mall. We reconnected thanks to MySpace. Call it one of the perks of social networking. We were both curious on how each other turned out after falling out of touch. We were certain our peers didn’t have much hope for us. After battling all the bullshit dished out in the deadly cocktail of adolescence and  public schooling, we found our respective paths once we reached college, or as to say when we had a choice in what we wanted to learn. It was nice to spend a couple of hours rehashing our collective middle school experience.
Using today’s educational jargon, they call it an intervention and the package includes: observations, evaluations, referrals, meetings, and so on to appease the legal system prior to composing an Individual Education Plan (IEP). This process is a kind and gentler way of saying your child belongs in special education.
When eighth grade was all said and done, I was a platinum member of the Frequent Visitors Program to the dean’s office and had racked up three suspensions before the end of the school year. This was in the days before the American educational system lost its sensibilities and instituted blanket zero tolerance policies; back then it was understood that doing stupid things was part of growing-up and not a threat to society. Not only was I permitted to continue my education, I was promoted to high school. My suspicions were that I finally wore out my welcome and dean and assistant principal wanted to pass the buck to the high school administrators across the esplanade.
After my flipping-off the Spanish teacher incident, I was introduced to Mr. Carlos Cuarón. Only a selected few in the school knew who Carlos was. During our introductory meeting he mentioned the first time he noticed me at school; apparently, I had been rolling around on the floor in the hallway. He sensed that I was a likely candidate for his Behavior Disorder Class and saved a spot for me. This is where I met Al, who was sentenced there for a reason he never wanted to share. One look at him and you’d know he was up to no good in a nerdy mad-scientist sort of way.
During Christmas Al and I made a deal to exchange gifts. I gave him the Thomas Dolby The Golden Age of Wireless album and he gave me the newest Circle Jerks release: Golden Shower of Hits-their unforgettable album cover with a stack of gold albums shoved into a urinal with freshly sprinkled urine dripping off them). When we unwrapped the albums in class Carlos rolled his eyes at the Jerks cover and reminded us for the millionth time about a video of some crazy band he had seen on public TV called The Red Hot Chili Peppers, who were practically naked wearing only long tube socks over their willies. I assured him that the Circle Jerks weren’t into tube socks, but maybe they were.
One afternoon during class, Al declared that he was going to give himself a mohawk the following morning at school. Noted. Most other kids would be all talk and no action, but that was hardly Al who believed in letting his actions do the speaking. It was a ballsy thing to say in school full of feathered, permed, and parted down the middle hairstyles. One weekend Al came along on a camping trip with my family and while walking around a lake having a political discussion about capitalism, he said if he had a dollar bill he’d burn it. I called his bluff and pulled out a bill from my pocket.  He produced a match and put his words into action in the great outdoors. He earned my respect from that day forward.
The following morning Al brought his clippers and word got around. When the bell rang for morning break, a group of us rushed and crammed inside the boys’ restroom. He plugged the clippers into a socket on the wall, hit the “on” switch and went for it. It was such a badass statement, everyone stood around him mouths open and in awe. You could read the “What the fuck are you doing” looks on our faces. No one in attendance would have dreamed of doing that during school. I imagined myself with his clippers, but all I could think about was coming home to my mom and dad’s reaction. Fuck that. I might have been punk rock, but I wasn’t that punk rock. Punk already wasn’t cool and mohawks were definitely taboo in our preppy saturated school. One of the jocks, Wayne McDonald, was definitely the most bummed out guy in the group. He let Al know this by punching him in the arm a couple of times while he was shaving the sides of his head. The hits were only a minor distraction to Al’s determination. When all was said and done, he mirrored a younger Robert Di Nero in Taxi Driver. Clumps of hair lay on the ground next to Al who stared into the mirror with a devious smile. 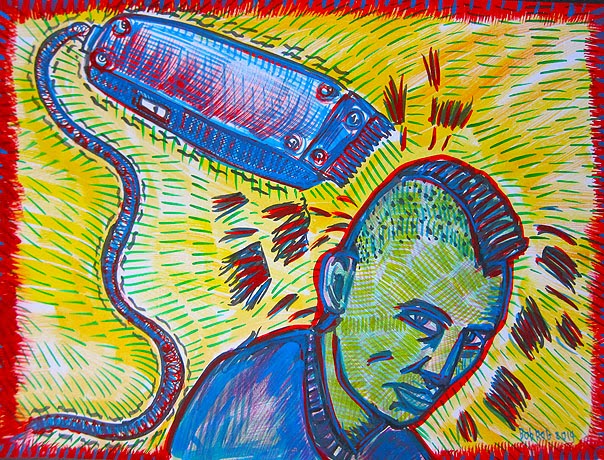 This particular bathroom was tucked away in a corner and served many functions, not only as a makeshift barbershop but also as a changing room. I would usually shove my punker pants (bleached and torn jeans with punk bands scribbled on them) and homemade band shirts into my book bag between my Trapper Keeper, and science textbook before leaving home. The routine went something like this; get dropped off by the bus in front of school, make a b-line for the toilet for a quick wardrobe change, and pop back out into the hallways to get in some face time with my peers before the first bell. It was a classic case of posing, a dorky ritual for a couple of us.
On the bus ride back home that afternoon I sat next to my friend Howie Ladson, one of the few blacks kids at our school. We talked about how crazy Al was and what our parents would do if we came home looking like that. Howie and I had been friends since elementary school; it was our minority status that brought us together. My induction into punk upped my outsider status that much more. Howie may have been black, but I was a fat brown punk rocker.

Special thanks to Ana Medina and Monica Zarazua for editing
Posted by Bob Rob Medina at 9:00 AM