It was as if film director Martha Coolidge had stolen my seventh-grade-punker-meets-preppy saga and crafted it into the cheesy classic, Valley Girl starring a budding Nicolas Cage and Deborah Foreman. Gag me with a spoon! I had a thing for preppy girls at the start of middle school.  Maybe it was their clean, wholesome appearance. When I first heard about “preps”, I didn’t quite get it. Heather Sutton was considered one. She was a popular, eighth-grader who tagged along side the Perkins twins (also preppies, but nice; therefore desirable to most adolescent males). I figured that Perkins twins already had their share of suitors.  Besides, Heather seemed more interesting; maybe it was the blonde hair. The grand plan was to profess my love to her before the end of the school year. Although I didn’t have a title for this strategy at the time, in retrospect I faithfully title it, Operation Dumbass.
Phase 1/Mistake 1: Buy Izod shirt to fit in.

Our school had several themed days to celebrate Spirit Week including Preppy Day, Punker Day, Twin Day, etc. In preparation for Preppy Day I asked my mom to drive me to the store, to find an Izod shirt. The only husky size they had was in a light tan color. Mom hesitated when she saw the price tag. But I begged for it, and after some coaxing, the Izod was mine. However, it needed my special touch, so I borrowed a seam ripper from Home Economics class and removed the alligator only to reattach it with a safety pin. I said my first hello to Heather in a slightly modified Izod on Preppy Day. 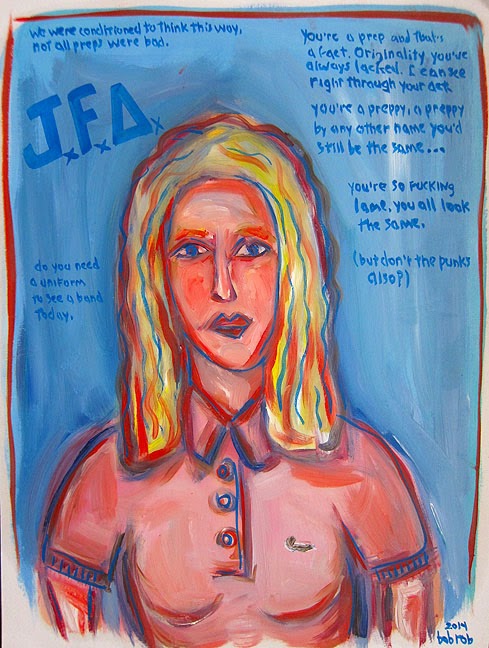 Phase 2/Mistake 2: Find out where Heather sits during lunch and passively stalk her.  She sat on a bench outside the commons area next to the lunchroom where I would walk past her at least once a day. We often made eye contact followed by a wave. Things were on the up and up.
Phase 3/Mistake 3: Get punched out in front of Heather. At the time, I thought Tim Stevenson was a big stupid hick. We had a falling out in the library, so I confronted him during lunch across from where Heather was sitting. I figured it was the prime location to get into a brawl with Tim so I could show off my imagined mighty fighting abilities to the girl of my dreams. With one solid punch to my shit-talking mouth, I laid on the ground while the assistant principal came to my rescue. Tim and I were both in trouble. While we sat in the office, he showed me his bloody knuckle and complained that my tooth jacked up his finger. The following day, Heather asked if I was OK. She talked to me!

My best friend Jimmy and I went to Spencer’s in Buckingham Square Mall to find a sentiment to express what I was too cowardly to say in person. For a mere second, that awful voice of reason reared its ugly self and put nonsensical questions into my head: Why did I need to buy Heather something?... “We weren’t dating: we didn’t really even talk!” It seemed rather presumptuous to buy her something romantic.

After Jimmy quashed reason by appealing to my sensibilities of teenage boy desires, I ended up forking over my allowance to purchase a giant, heart-shaped box filled with Red Hots candies adorned with, I got the red hots for you in fancy gold cursive letters across the lid. Jimmy was certain that Red Hots would be my golden ticket to romance.

Valentine’s Day came and went, and Jimmy wanted to know how my gift had been received. I tried to avoid the conversation and told him that Heather liked it, hoping that would be the end of it.
“She liked it. That’s all? What did she say?” His questioning was relentless. Most of all, he wanted to know if we were making out.  It was the daily topic of interrogation. Thankfully time eventually passed, and the Red Hots topic was temporarily shelved.
The ugly truth was revealed several months later when Jimmy spent the night. It just happened that my cousin Linda was visiting and was staying over as well. In a matter of an hour, Jimmy quickly developed a crush on her to the point that he offered to play strip poker in the basement with her. She agreed and made sure that I played along. Can you imagine?
What did you do this weekend?
"Nothing really, just played strip poker with my cousin and best friend."
Thankfully Linda called the game when his shirt was about to come off. After the very short awkward game, Jimmy went upstairs to use the bathroom. Not a minute later, I heard him call my name while racing back down shaking something in his hand. "Fuck!" I was busted big time; I knew what was about to go down. Linda gave me the what-the-hell-is-going-on look. Jimmy stood at the top of the stairs, shaking the heart-shaped box of Red Hots shouting, “YOU’RE A FUCKING LAIR! YOU NEVER GAVE IT TO HER AND YOU’VE BEEN EATING THEM!”
True, I had been hiding the Red Hots for over three months and naturally didn’t want the candy to go to waste… I really wanted to give it to Heather but muster up the nerve. Let’s face it: When Valentine’s Day is over, that’s it. There is no giving a half-eaten box of candy in May to the girl of your dreams. Jimmy caught Linda up on my Heather saga while the three of us sat on the couch passing around the box finishing off the candies. With red fingers and lips we flipped the channels between HBO and MTV. 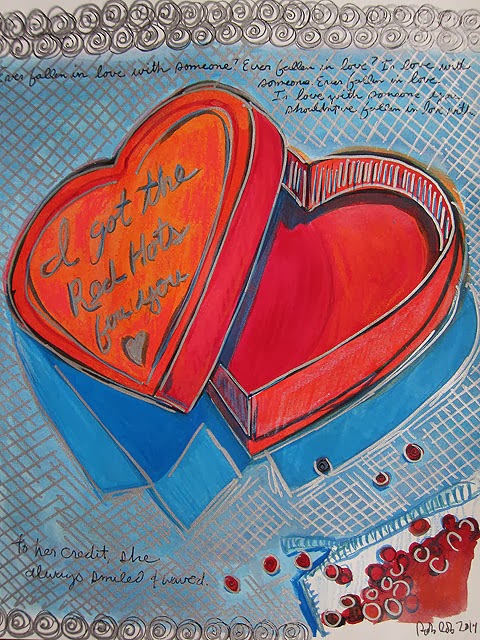 Phase 5/Mistake 5: Blackmail best friend.  In a desperate last attempt to win Heather’s affection, I begged Jimmy to call her for me. I know, I know… it don’t need to be said. It was our last week of school. At first he went through the motions of rightfully calling me a pussy-wimp-loser finalized by a resounding: FUCK NO, I’M NOT CALLING HER FOR YOU! He didn’t leave me a choice but to go nuclear and pull out the cousin card. Without shame, I used Linda as my bargaining chip, maybe even as a hostage to negotiate. Times were desperate, school was almost over, and Heather would be heading into ninth grade across the street, so everything was fair game.  It was my Hail Mary pass. And with my question to Jimmy: Do you want to see Linda again?, we struck a deal over the phone. I looked up Heather’s number in the school directory, gave it to him, and hung up. He called me back five minutes later to deliver my official kiss of death.
I saw Heather the following day during PE and asked if my friend had called her. We talked for a few minutes; it was sort of like an exit interview when you lose your job. She known all year that I liked her, but she already had a boyfriend?! I handed her my yearbook to sign. She wrote: I LOVE YOU over an entire page with her name scribbled going off the edge. I looked at the page all day and maybe the entire summer. With my book bag hanging on my shoulder crammed with all the shit from my locker, I boarded the school bus and waved farewell to her. It was the last time I saw Heather.
Posted by Bob Rob Medina at 9:46 PM