As Punk crept into the national psyche it became more visible; it was a dark plague that disrupted the illusion of normalcy, a wake-up call that the Leave It To Beaver days of America are in the books. Reagan’s red scare fear tactics had Americans conditioned that we were on a brink of a nuclear war and if that didn't shake up your paranoia how, about  Russian paratroopers awaiting invasion orders; yes fools, World War 3 was lurking round the corner. My eldest brother Tom, a US Marine, made it sound that war with the Commies was inevitable. In my mind he was an expert in military matters. Like most other Americans, it was something I worried about. I was unaware at the time, but with the music I was identifying with coupled with the threat of human extinction I started to develop existentialist leanings. Why would God allow such things to happen? There was some far out Amazon tribe we were studying in Social Studies class, I remember thinking how they would be affected by nuclear winter because the Superpowers didn’t get along. What did those people do to deserve that? Here it is 30 years later and it all seemed like we’d been swindled by the powers that be. Was there ever a genuine threat of total annihilation? Sadly, that idea got recycled; America traded in the Russian boogieman for the Muslim one. I bought that load of shit growing-up, but not this time, thank-you-very-much.
April of 2013: I was fortunate enough to tag-along with my favorite band FLAG (Black Flag) for their 3-show European stint. The line-up consisted of four former Black Flag members (Keith Morris, Chuck Dukowski, Dez Cadena, and Bill Stevenson) with Descendents/ALL guitarist Stephen Eagerton. Chuck and I had a couple of conversations about power and war, he asked me about my first-hand experience of going through the 2011 revolution in Egypt. After Mubarak fell, the people were without police and a government; that absence empowered ordinary citizens. He was interested in hearing how people protected their neighborhoods and cleaned the city their own volition; Egyptians embraced ownership. Without rules and rulers, it was astonishing to observe to how well people behaved and took care of each other. Living in Egypt and getting the opportunity to travel around the world over the past four years I have come to a somewhat simplistic realization that most people just want to be happy and left alone to live their lives, in short we want to be loved by family and friends without outside factors dictating our lives. I would argue that humans aren’t born wanting to hurt one another; we are conditioned to. Chuck chimed in and said that most world leaders and power hungry individuals are sociopaths. He made a point that many soldiers/fighters in third-world conflicts don’t have enough money for food but carry high-priced weapons and shoot rounds or costly bullets. The question is: who supplies these people and what rewards do they hope to reap? Punk taught me not to accept answers at face vale, but to dig deeper. 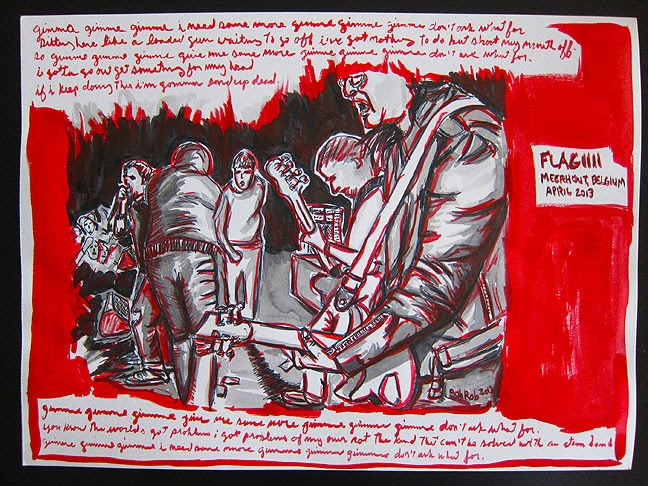 Special thanks to Ana Medina and Monica Zarazua for editing
Posted by Bob Rob Medina at 8:53 PM