How Black Flag got me into trouble.

Punk Rock, mohawks, dyed hair, and crazy music will hardly raise an eyebrow in today’s world; you won’t get sent to the office or have your parents called. In fact, the principal might be all buddy-buddy and say something like “nice hair dude.” The landscape for us punks back in 1982 was quite different; people crossed the street when you walked their way. The reality is most people didn’t know how to deal with punk.  They were cowards and afraid of something different. Choosing to be punk in the early 80’s was essentially agreeing to be fucked with; to get your ass kicked by jocks and rednecks, to be called a slut and whore if you were a female. If you didn’t fit in before you were punk, you definitely weren’t after you became one. Your family thought you were crazy and wanted to lock you up or send you to a shrink.  The friends you grew up with didn’t really want to associate with you anymore. You modified your clothes and made your own band t-shirts with markers. You went to watch bands in the sketchy part of town near the slaughterhouses or around the corner from the Jesus Saves Center, which was across the street from the gay biker bar. If you saw another punk on the street they were your friend-no questions asked. Most of the world was against you, especially cops and authority figures. That’s the way it was.
Back in the mid-90’s, I posted the following eighth grade memories on a Black Flag fan website. Most people’s reflections had to do with seeing the band, mine didn’t. When you read the second story, maybe you’ll find it ironic that I grew up to become a middle school teacher. Chew on that thought for awhile.
Story number one:  My first memory of Uncle Joe and Aunt Flora was during the mid-70’s when they drove out from Los Angeles to Denver with their kids crammed in the backseat. I mostly remember the night they left, everyone piling into the car and the long goodbyes and the promise from my dad of going to visit them in California. When they drove off, more than anything, I wanted to be in that car; for a six year-old, it wasn’t fair they got to go back to Disneyland and the beach. I imagined California to be a utopia lined with palm trees, a giant landscape of infinite dreams and possibilities.
My dad kept his promise.  In the summer of ‘77 we packed-up our Thunderbird motorhome and made our way to the Golden State. The first leg of our southern California tour was hanging out with la familia in Logan Heights (Barrio Logan), San Diego followed by a short stay with my dad's military buddy at a posh community of the Huntington Beach yacht club. Los Angeles couldn’t come soon enough; we were at the edge of the Magic Kingdom. When we finally arrived it was all I hoped for; from Mickey Mouse to the obviously fake Jaws attacking our tram at Universal Studios to swimming in the Pacific Ocean. The best part of the trip was staying with Uncle Joe and Aunt Flora and meeting my cousin, Veronica aka Pumpkin. In my mind she was the coolest because she had a skateboard and taught me how to roll down the sidewalks in Huntington Park. Her mom went and bought me a board so we didn’t have to take turns. Inside the walls of my uncle and aunt's house was a weeklong party. The drinks kept pouring and my mom and aunt danced celebrating life and the recent  Pacific Bell phone bill. It was silly and simple fun, good times at its best. 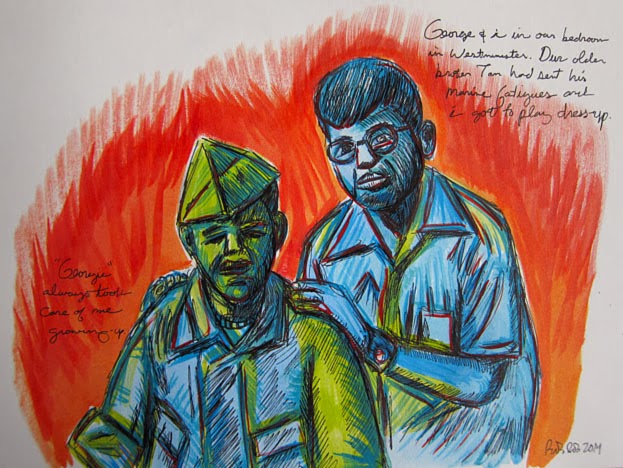 In 1983 my parents flew out to LA to visit Aunt Flora who was in the hospital; I was left alone with my older brother George. It didn’t click how sick she was. I was more or less a self-centered 14-year old boy who locked himself in his room and listened to his albums. I was excited they were going to the city where punk and hardcore ruled and I desperately wanted them to bring me back something cool. I asked if they would buy me Black Flag’s Damaged LP and a t-shirt from the band. My mom said she would try her best. One of my cousins did find the record and my mom had to carefully removed the ANTI PARENT STICKER from the cover. As for the t-shirt, they settled on stopping at an iron-on letter place in the mall. Visualize a green shirt with yellow iron-on letters spelling out Black Flag with the bars going in the wrong direction. You could have imagined the look on my face when they pulled it out of their suitcase. Everything about it was wrong. I laugh about it now. In a sense they made a mockery of the band. Here’s a powerful five-piece playing night after night annihilating their audiences, living on the edge of reality and then the kryptonite comes out of mom and dad’s suitcase. That afternoon they took down one of the most powerful bands and didn’t even know it.
One of the growing pains in life is the lack of foresight in truly appreciating the moment, especially in the self-involved world of adolescence. I accepted the shirt politely. But I couldn’t and didn’t wear it because of how I thought I would be perceived by fellow punks. The truth is, no matter what group you try to fit-in with, your presentation is a form of visual coding (semiotics), and as much as punk professes individualism, there are still rules. In present day, the design and color combination has a biting irony to it. I now fully appreciate the efforts that went into making the shirt while my aunt laid in the hospital dying. I would kill to have those moments back, but mostly what I wish for is for my mom, aunt, and uncle to keep rambling about the phone bill while dancing the night away.
Story number two: I received a small packet in the mail from Black Flag. They sent a poster, stickers, fliers, tour dates and a personalized note. I was stoked. I brought the goodies to show my fellow punker friend Rob in Spanish class. Henry Rollins had stuck an extra MY RULES (the middle finger) sticker in the package and I passed it along to Rob. The bell rung and class was starting with all the contents still spilled out on my desk. Ms. Hendrex walked down our row attempting to get class going and firmly asked me to put the stuff away or she would take it. I told her nonchalantly, "You take it away and I'll kill you." She paused for a second and more or less dismissed my response, perhaps she would deal with it later. She continued walking to the front of the class. When her back was turned, I stood up from my seat and flipped her off. She turned back around and my finger was still in the air (I was slow and stupid). She violently yelled for me to get out of her room. I was sent to the office. She came down after class to where I was sitting and crying (you don’t know my dad!) She was also crying and angry. She told me that she never wanted to see me again and asked my advisor to remove me from her class. He did. I was suspended for 3 days and grounded for weeks. 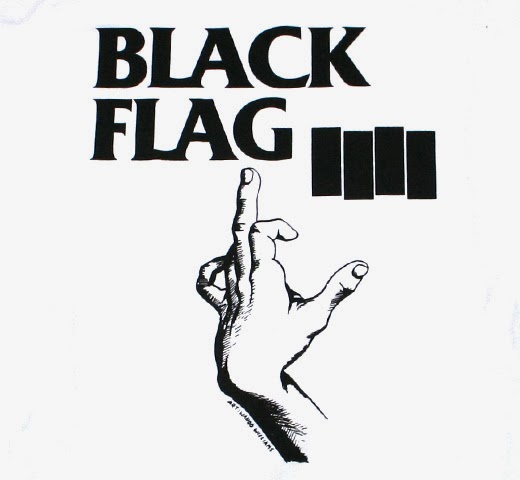 When I returned back to school, I went to go see her on several occasions to say I was sorry. She never did accept my apologies. Two years later in 10th grade she transferred to my high school. One afternoon I was walking through the hall with my notebook that had a MY RULES sticker on it. We passed each other and it was an awkward moment since we recognized one another. We didn't say anything, but I had a gut feeling she saw that sticker.

Special thanks to Ana Medina and Monica Zarazua for editing
Posted by Bob Rob Medina at 10:27 AM